What a year this has been for LivestockCity!  We accomplished so much.   In January 2021, we began recoding our entire site from using ASP.NET/C# to Django/Python.  This was a tremendous amount of work!  But it was necessary to expand resource options. Around April of 2022, we had finally recoded everything that was online prior to 2021.  The end result is a website that loads quickly, with much less errors and bugs.  This was a huge hurdle to overcome since the very inception of LivestockCity years ago.  We also have been working on mobile apps.  Although we did not hit our goal of submitting our first version of the apps to the app stores, we finished near this goal.

As so much effort has been put into the building of the site, less effort was put into marketing.  In 2023, we will put more emphasis on growing the site’s user base.   It was important to first have a quality site, which will be a continual array of improvements and updates. Now that the infrastructure is in place, we can work on scaling.

Here’s a summary of what we accomplished in 2022:

1. Finished the conversion of the web app from ASP.NET/C# to Django/Python.
2. Built out new features that will be introduced in Q1 2023.  Some of these features still need testing or final touches.
3. Moved the site to a new host to be able to use web socket technology and other requirements.
4. Progression on mobile apps was great and should be ready for the app stores sometime in 2023.
5. Our interns were successful in landing their first jobs in the job market.

1. Roll out new features in Q1 2023
2. Roll out mobile apps (Phase 1) consisting of all the “networking” features from the web app.
3. Introduce Phase 2 (herd management ) and Phase 3 (sales tools) to the mobile app before the end of 2023 .
4. Grow and scale the user base.
5. Create our first revenue for the company.
6. Introduce a couple new big features that have only been discussed internally.
7. (Maybe) introduce a new design for the web app.

So we close out 2022 this week and welcome the New Year next week! We will hit the ground running, and we’re excited to see how the year goes.  If you are reading this, thanks for your interest. 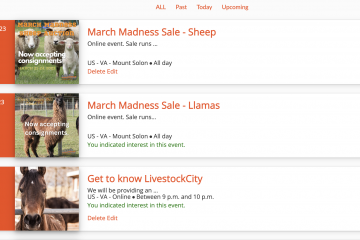 The Origin of the March Madness Sales and LivestockCity

LivestockCity is excited to announce our first ever online auction of cattle, horses, llamas, alpacas, sheep, goats, and pigs! This event will take place during the month of March 2023, with a separate sale for Read more…